Here is a little something you should read if you are or are thinking about entering an inter-diasporic relationship.

My dad is from Nigeria. And My mom, is African American. To be specific, the south side of Chicago, African American. So growing up I was split between these different black identities. It may seem unimportant when the police get to you. People of privilege don’t delineate between whose great great grandparents were descendants of slaves they just see one clear thing: undeniable black skin. However, it is undeniable there are differences within that unifying factor.

My dad comes with the the traditional immigrant narrative. The one where he washes up on the feet of the Statue of Liberty with nothing but the clothes on his back and the desire for a college degree. He often reminded me how they had to travel to the river for bath water, and he would make me do it too if I didn’t shut the weather completely off. I have found that t is more than just Nigerian kids who have these experiences, it’s a second generation immigrant thing. Indian, Arab, Asian parents all threaten to ship kids back to the old country if they don’t behave. There is this pressure to succeed because your parents escaped the bush.

On the other hand is my black mother. Her grandparents were enslaved as children in Mississippi. Her father traveled to Chicago during the Great Migration, where he was able to own property in the budding black middle class that is now Morgan Park, Chicago. That side of my family is the typical black family. We love a strong black Jesus, get together and listen to Earth Wind and Fire’s Greatest Hits, play Spades, and love each other unconditionally. However, this side is also the victim of American institutionalize racism, cyclical poverty, and mass incarceration. A foreign narrative to my Nigerian side, who had skipped Black American pain for their very own.

I recognize that my mother was giving way to her African American identity when I was about 16. When she married my father, she took and Igbo name, Ngozi. Wore African clothing, kept her hair braided. She began to stop making macaroni and cheese (with the cream cheese) and learned how to make Egusi Soup and fufu. Jollof rice, while delicious, was our new holiday staple. (Can we take a moment of silence for my mom’s pre 2000s mac and cheese, lost but not forgotten). I will never forget when she suggested I replace my Destiny’s Child poster with a picture of Miriam Makeba. My mom stopped raising us black and started raising us as her interpretation of African children. It appeared that the trauma of her average black American family had worn on her, and she was ready to experience a new one.It hurt me, left me feeling incomplete. Although I was being raised Nigerian, I was socialized in my community as a black girl and I missed out on a lot of connections with my peers as a result of that.

So who’s black get erased when the two worlds combine? I caution African Americans against grasping at African customs as if African American is not something real. I think that most outsiders see blackness as this monolithic experience where at the end of the day Mother Africa unites us all. That is unfair because: slavery. African American is a culture all its own. In case you forgot, Black Americans created half the music you listen to, inspired many of the dishes you eat. Cook your kale with some smoked turkey and tell me that ain’t greens. Just as African nations all have their distinct cultures. A sharp reminder of that is that French Montana is from Africa. 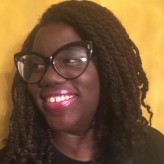 Joy Mohammed is a writer based out of Detroit. She is passionate about education of black and brown children, learning new things, traveling, and eating all the food on her plate. Facebook: Joy Mohammed IG: pluswithminuslifestyle Twitter: pluswithminus